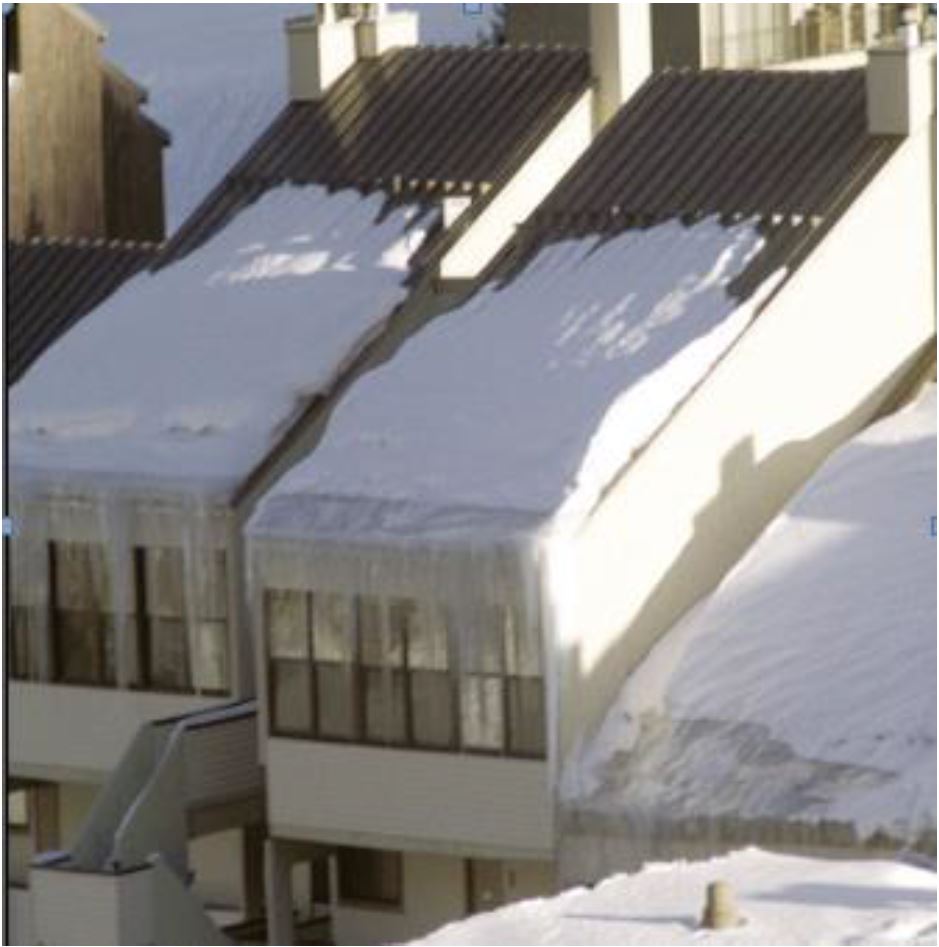 Snow melts on a roof due to several factors. Each factor can have different effects on resulting activity, and snow often thaws from multiple causes simultaneously. The following explanations of snow-melt phenomena are not unique to metal roofing, but are similar on all types of roofing. In some cases, the effects of these snow-melt patterns may be different for metal roofing, but in most cases, they are similar regardless of the roof material type.

The first (and most obvious) cause of snow-melt is simply the temperature of ambient air. When snow accumulates on a roof, ambient air is typically at or below freezing. As ambient air rises above freezing, the snow blanket melts from the top down. Often, an incidental phenomenon is that the snow will develop a “crust” from this type of thaw. The crust occurs because the outer surface of snow blanket melts and the melt-water begins to migrate downward into the blanket that acts somewhat as a sponge. When ambient temperature again drops, the outer layers of snow bank, which has retained liquid water, re-freeze causing a denser and more solid surface “crust”. This mode of thaw passes the melt-water from the top down and can increase the density of the blanket in the same direction. Except for a small amount of water that may evaporate during this process, the moisture and its weight are still present, however dimensionally the depth of the blanket is reduced. A side effect of this crust is significant tensile strength/cohesion binding the snow blanket to itself as a unit.

Other snow-melt phenomena occur in the opposite direction, from the bottom up, and happen due to two different causes. First, snow is somewhat translucent and can experience solar thaw. The non-reflected solar energy that strikes the roof surface through the blanket of snow converts to heat and raises the temperature of the roof surface. As the temperature rises, the snow blanket melts from the bottom up. This melt phenomenon is actually more common and frequent on most roofs than ambient thaw. It also can occur even on cloudy days when ambient air temperatures are well below freezing.

Under normal circumstances, melt-water resulting from solar thaw will drain freely from beneath the snow blanket. The lower portion of the blanket, however, will absorb some of this melt-water, thus increasing the density of the blanket from the bottom- up. This phenomenon is the most common, particularly when the roof is a dark color and has a high solar absorption value. This type of solar thaw can also have some side effects of which the building owner or designer should be aware. The first is sudden release of snow from the rooftop.

When snow accumulations blanket a roof at low temperatures, a strong but temperature-sensitive adhesive bond is formed between roof and snow. When sunlight warms the surface of the roof, not only is that bond broken, but the roof surface is also lubricated by melt-water, greatly diminishing any frictional resistance between the snow and roof. This often results with the entire vector force of the snow blanket experienced at the ridge area. The force usually exceeds the cohesive (or tensile) strength within the blanket, and the blanket splits at the ridge area. This can cause a sudden release of the entire accumulation of snow from the roof.

When snow is retained on a roof, either by design, or due to the physical geometry of the roof, solar thaw can also pose special drainage considerations. Because this type of thaw occurs when ambient air is well below freezing, the melt-water that drains from the roof can quickly re-freeze. This is especially true if it drains to a surface with different solar absorption characteristics than the roof. It can also occur if the new surface is shaded from sunlight. An example might be a walkway or landscape that is shaded from sunlight by the building wall or nearby trees. The roof is warmed, snow melts, melt-water leaves the warm surface of the roof and falls to the ground. If the ground is below freezing, the melt-water will quickly re-freeze.

Similarly, if the eave is drained via guttering, and the gutter or down piping is a lighter color or shaded from sunlight, the gutter or down piping can freeze, burst, or otherwise fail. This problem can be alleviated to some degree in a number of ways. Gutters and down piping, if exposed, can be a color the same as, or darker than, the roof itself. With a higher solar absorption characteristic gutters and down piping will be warmer than the roof surface from which the melt-water is shed. If possible, avoid locations or designs that will result with shading of these components. Additionally, openfaced downspouts can be utilized. This will not necessarily prevent freezing, but may provide relief from freeze-bursting. Heat tracing the down piping, or routing it inside the building wall in a heated interior, is another alternative.

Ice on a roof can have extremely damaging effects. The incredible force of freezing water is known to break solid steel engine blocks and can certainly wreak havoc on a roof.

Constant re-freezing of melt-water, whether at the eave or some other roof area can accumulate to significant depths, forming ice dams. (This phenomenon happens on all types of roof and is by no means unique to metal roofing.) Aside from potential mechanical damage to the roof itself, an ice dam can have several other effects on a roof.

First, an ice dam will create rather unpredictable snow retention (Figure 6B). In this case, the bond of the ice to the roof is sufficient to withstand vector forces of snow blanketing the roof.

This bond is temperature sensitive. When conditions change it can be broken causing a sudden release of both the ice and snow blanket, which may create a potential hazard to anything below the eave. Second, the ice dam is quite effective at retaining liquid melt-water on the roof upslope and adjacent to the ice formation (see Figure 6A). This liquid melt-water can submerse upslope roof construction. Depending upon the infiltration characteristics of that construction, leakage and other sub-roof water or freeze damage may occur. The third effect of icing is the point-loaded weight of the ice bank. Ice weighs about 5 pounds per foot per inch of thickness. Many structures and roof materials are not designed to support an ice build-up of several feet, which has been observed on some roofs.